With Saints Peter & Lawrence you can stand firm in the Faith 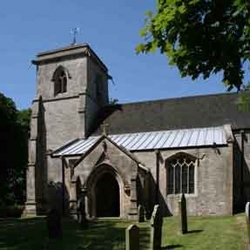 The church is mainly a combination of Victorian and 13th century work. The west tower was built by the famous George Gilbert Scott in 1868, followed in 1878 by the building of much of the north side of the church. The south arcade of the church, however, dates from the 13th century. The piers are octagonal inshape. In the south aisle there is a distinctive ogee headed piscina. A number of small stone heads dating from the early period of the church can be seen on the south aisle roof-corbels and also reset in other locations. 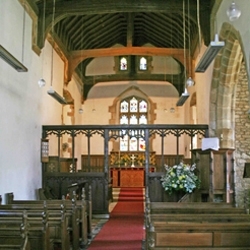 The main east window is 19th century and depicts episodes in the life of Christ. High above it are two small niche stained glass windows depicting the church's two patronal saints Peter and Lawrence.

On the South wall the stained glass is early 14th century. It depicts three medieval family shields of the Percy, Umfraville and Beaumont families and, it is thought, glazed by the Chamberlain family. The  yellow-silver stain used in this stained glass is quite indicative of its very early age.

The ancient door of the church displays skilful ironwork dating from an early period. The porch is a more recent addition. By the side of the door can be seen the vestiges of a medieval sundial. 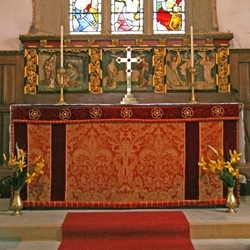 There are various interesting monuments in the church. Of special note is a monument in the south aisle dated 1635, inscribed on a brass plate with an alabaster surround, and dedicated to Henry Millner.