You will find the Christian message in stained glass 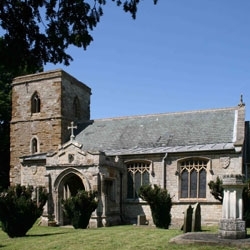 The oldest part of the church is the lower section of the tower dating from the 13th century. It retains the original narrow tower arch and small lancet window in the west wall and was extended upwards in the 14th century.

The Church was enlarged during the 15th century and later had restoration work done under W.A. Nicholson and Sir George Gilbert Scott in the 19th century. The nave arcading, most of the windows and the south porch date from this time.

The mosaic and marble reredos was added in the late 19th century and displays Italian workmanship similar to that found in St Marks, Venice. The octagonal font is 13th/15th century with a modern wrought iron top.

Most of the windows are in stained glass and include designs that illustrate:

The Nativity with Shepherds & Wise Men 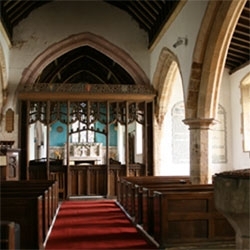 The Crucifixion   "Then said he to the disciple, behold your mother."

Six of the Saints: