The history of our bells

The bells of All Saints, Wragby are much older than the present building. The oldest are bells 4 and 5 which are very venerable indeed. It is believed they were cast long before the Reformation in a Nottingham foundry between 1440 and 1510 and both have a shield bearing the initials ‘R.C.', a shield recorded between 1371 and 1512. Bell 4 weighs 5cwt. 1qtr. 6lb. (269kg) has inscribed the name ‘Katerine' and bell 5, 6cwt. 3qtr. 8lb. (347kg) has an inscription ‘Huis Sci Martini Epi' which translated is ‘St. Martin's bell'. 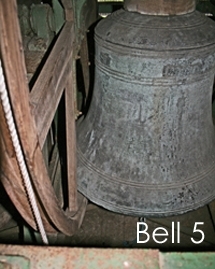 The next oldest is bell 3 weighs 4cwt. 2qtr. 20lb. (238kg) which was originally cast between 1590 and 1620 by Henry Oldfield of Nottingham. This bell originally had the marks of Henry Oldfield inscribed on it, but these were lost when it was recast in 1890 and a new inscription was added, ‘"Jesus be oure spede" - recast by John Warner and sons, London, 1890, Henry Bolland - Vicar, E. Barry Denny / Thomas Cockett / churchwardens 1890'. These three oldest bells originally hung in the church of St. Martin, Kirmond le Mire, near Louth. Sir dmund Turnor acquired the Kirmond estate and pulled down the nave of the church in 1690. He then transferred the three bells to Wragby Church in 1697 and had three additional bells cast that year (the ‘new bells') to increase the peal up to six. These bells were cast by William Noone a bellfounder in Nottingham from 1678 to 1731 (apparently giving rise to the quip that ‘no-one cast these bells'). Bell 1, the Treble wighs 3cwt. 2qtr. 11lb. (183kg) bears the Latin inscription ‘Tempore W Stephenson et F Wells 1697'.  Bell 2 is 4cwt. 1qtr. 22lb. (226kg) and is inscribed ‘God save his church 1697'. Bell 6, the Tenor tuned to F sharp, is 8cwt. 0qtr. 4lb. (408kg) - approaching the weight of a small car had the inscription ‘All glory bee to God on high 1697'. Unfortunately this inscription was lost when it was recast in 1890. 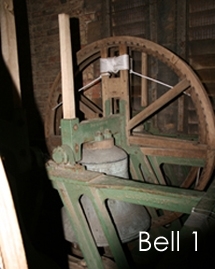 During 1838 the bells were moved from the old church to the new church tower. In 1890 all the bells were taken to the Bellfounders John Warner and Sons in London where bells 3 and 6 were recast and all the bells retuned. In 1972 it emerged that major work was required. The bells were sent to Taylors of Loughborough to be retuned, the wooden bell frame was replaced with a metal frame and metal headstocks were fitted. The work was completed and the bells returned in 1974.

The position of the bell-ringing chamber high in the tower made ringing Wragby's church bells particularly challenging: access to the chamber was difficult, and the relatively short drop of rope between bell and ringer made controlling the bells far from easy. A combination of great commitment, energetic fundryaising and generosity enabled this situation to be addressed. Bellringers, friends and supporters, through their skill, perseverance and hard work built a new bell-ringing chamber lower in the tower. The longer distance between bells and ringers made ringing a much more satisfactory experience. Access was improved by moving the staircase from the base of the tower to the rear of the church. Two wheels and ropes were added so that with the aid of a computer (an arrangement known as a ‘simulator') ringers could have the sensation of ringing a peal of eight bells. The new bell chamber was dedicated by the Bishop of Lincoln as part of a memorable service in 2004.

All Saints, Wragby was now able to develop as a venue not only for bell ringing but also for the teaching of bell ringing. Visitors from near and far regularly come to ring the bells and their involvement, support and experience has been greatly valued. Interest in bell ringing has also grown locally so that within Wragby itself there are now sufficient ringers to ring all six bells. The sound of the bells rings out to the community a heartening message of Good News every Sunday morning before the main service, as well as on other important occasions. The celebrations of Christmas are heralded by the ringing of the bells before the Midnight service of Holy Communion. The arrival of the New Year is also marked by the ringing of the bells. On the stroke of Midnight the chimes of Big Ben are echoed by twelve chimes from All Saints, Wragby. Although the sound of Big Ben may seem venerable, some of Wragby's bells were ringing out four hundred years before it was even cast.