Here you can follow the St Oswald pilgrim trail to Bardney 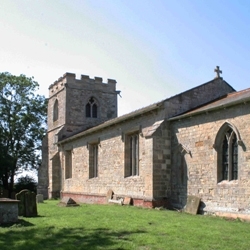 Rand is a hamlet, situated just off the A158 road half-way between Langworth and Wragby, its name denoting a ridge overlooking a valley.

The church has been standing remotely in the fields since the early 14th Century. There are records of organised worship dating from the 13th century when there seems to have been an open-air mission station marked by a cross, where the gospel was preached and mass was celebrated. It probably stood in the deserted mediaeval village which surroun­ded the site on which the church now stands.

The present building is of grey stone, with a slated roof. It has a broad west tower, with gargoyles, built in the 15th Century. The bell openings are decorated and the west window has a Norman monster head. There are two bells; one 27½ inch, dated 1715 and marked Jesu be our speed and the other 32 inch, believed to

be 15th Century and marked Ave Maria. The nave and chancel were restored during the last century but the chancel arch is over 500 years old. There is a stone pulpit with a brass rail. The octagonal, font is also of stone, with carvings, and was re-set in 1902 to commemorate the end of the Boer War. The head mould of the east window is early 14th century but the communion rail and the choir stalls, are Victorian. The oak communion table has a stone reredos consisting of three arches with decorated alabaster panels, the centre one containing a cross.

The church possesses a wonderful array of monuments, both in brass, and stone. In 189O portions of six brasses found loose in the vestry were grouped and refixed on a slab on the north wall of the nave.

Two of the stone monuments are shown here. Note the eight children beautifully carved in stone.